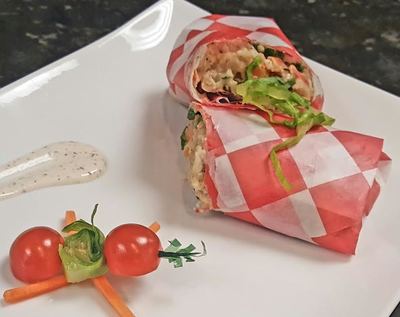 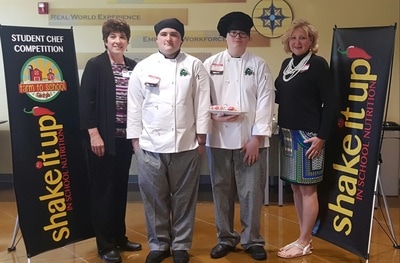 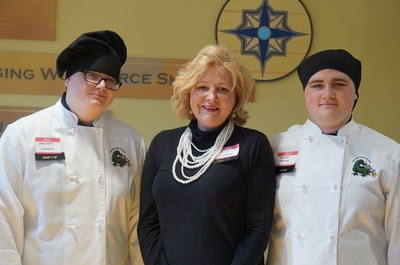 The Georgia Department of Education School Nutrition Program, under its Shake it Up in School Nutrition initiative held is first annual Farm to School Students Chef Competition on Wednesday, April 26th in Macon, GA.   Teams from across the State of Georgia competed to develop nutritious, student-friendly recipes that included Georgia grown products and that could easily be incorporated into school food service programs.  The competition consisted of a Recipe Contest and a Cooking Competition.
Beth Thompson, School Nutrition Director for Pickens County, partnered with Sue Gibbons, Culinary Arts Instructor at Pickens High School about having the advanced Culinary Art classes at PHS develop recipes that would meet the National School Lunch Program (NSLP) meal pattern and nutrition standards for Grades 9-12.  In the first round, the class was divided into 8 teams of two to three students and where challenged to create a chicken wrap recipe using different flavor profiles that were randomly assigned.   The winning chicken recipe inside the classroom competition was the Warm Chicken Ranch Wrap. Mrs. Thompson then worked tirelessly with the students to make sure that the winning recipes meet the nutritional guidelines before being submitted to the State.
In the second round, the top six finalists from the Recipe Contest were invited to prepare their recipe at the Cooking Competition at William Hutchings College and Career Academy in Macon, Georgia. Pickens High School Seniors, Dalton Lathery and Dylan James, were among the teams who qualified.  Their dish was judged on taste, student appeal, presentation, and creativity.  The Pickens team placed 2nd in the chicken entrée category with their Warm Chicken Ranch Wrap entry.  It will be a regular feature on the PHS cafeteria menu for the 2017-2018 school year.
TV News channel, WMAZ in Macon, reported the story. You may watch the footage at http://www.13wmaz.com/news/local/students-shake-it-up-in-chef-competition/434392814